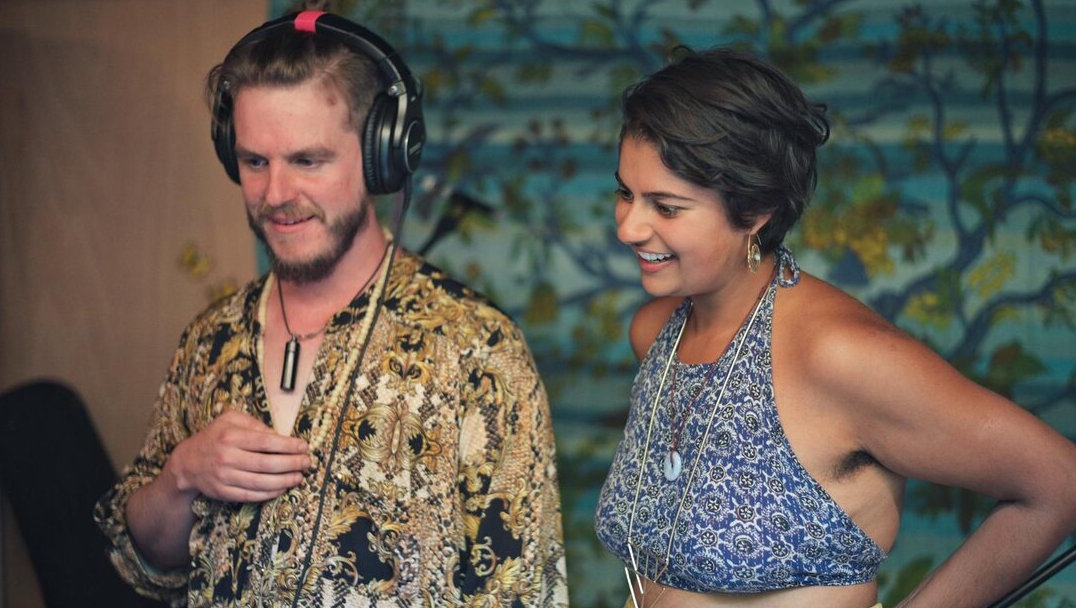 A couple of weeks back, Bristolian Spiritualised, Acoustical-Electronic-tinged-Folk Rap Duo, Bradley La & Cosmic Soup brought their positive energy and inspirational tunes to the Camden Live Stream.  I caught up with them after their set to chat, music nada yoga and learn a little bit more about the celestial couple and where they draw their inspiration from.

Bradley: Good. Thanks. I’m having a party today. So preparing a small Birthday do for the people in the houses around us.

How long you’ve been playing music for?

Bradley: Well, I’ve been playing music since I was seven. I started playing piano and I picked up a guitar when I was maybe 13, mostly to get girls and it kind of works! But this new musical outfit is a new thing, really.

So how long have you been playing together as Comic Soup?

Vanisha: We met about a year and a half ago. We started kind of playing improv music together, like just improvising songs and doing a lot of open mics and things, but actually performing together started probably this summer, beginning of this year, maybe.

Bradley: Vanisha was quite new to the world of music when we met. I can see through her eyes a fresh way of looking at it. She has the spirit that I had when I started out.

During lockdown we started sharing songs that I’d written and adding Vanisha’s magic to it as well. 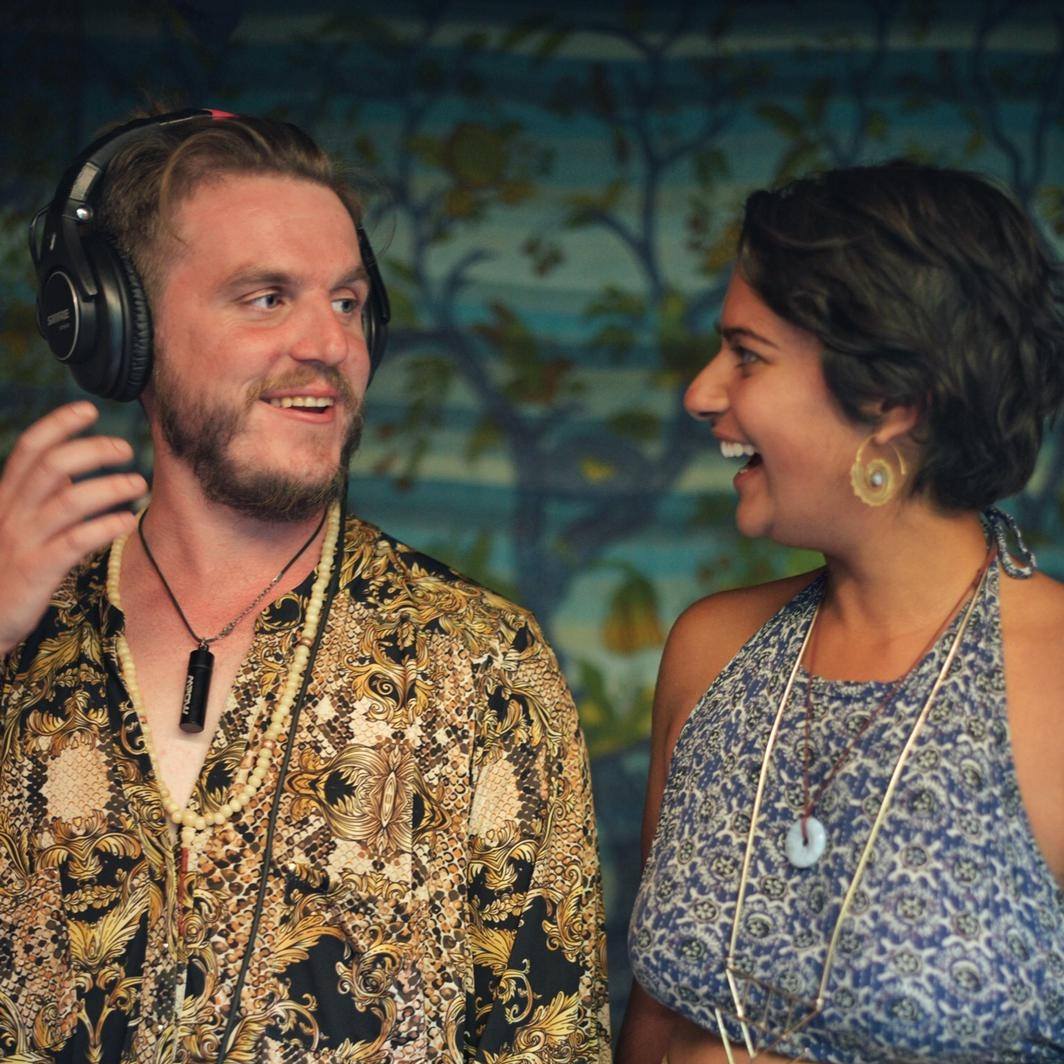 How did that change the process for you?

Bradley: Well, it’s a work in progress for me ’cause I’m still learning to humble my ego, I think, I think I’m quite perfectionistic and I spent a lot of time working on things. Is it safe to say you’re (Vanisha) more kind of gung ho?

Bradley: So in a sense, it’s helping me to overcome perfectionism by working with someone else.

Vanisha: Yeah, learning to go for it and see what happens.

What releases have you got out there at the moment?

Under this guise, Bradley la and Cosmic Soup, we have not yet released anything. We just did a crowd funder for our debut album and there will be a single early next year. and that will be the beginning of our releases.

How about your previous projects?
Yeah. I used to make, like, electronic type music under the guise, ‘Igloop’ and had a fair few releases.

I noticed you’ve integrated live looping into some of the material for Bradley La and Cosmic Soup. It’s interesting as the music is quite organic. Have you always had an interest in melding those electronic elements into a rootsier sound?

But I do love the flow of the organic playing and the organic way. So. I’m currently learning to bring these two together again. I think it’s going to sound great. We haven’t been doing it live that much. We’ve played two concerts where we’ve been using the electronics as well and it is great. There’s a lot of bass and it does add another dimension to it.

What kind of themes do you write about?

Bradley: We write about consciousness and about unity, about nature connection with nature and about the complexities of living in a systemized society.

Vanisha: And more recently, the idea of sharing lyrics that inspire visions of like a better world, rather than focusing on the negative things around us, because there’s so much heaviness in the world. We like to create songs that are actually inspiring positivity and promoting positive change.

I guess some of those ideas can be quite complex ideas to convey. How do you find it, trying to put those concepts across in lyrical format?

Vanisha: You’ve forgotten how not to write like that!

You’re also involved in meditation and yoga and incorporate those ideas into your music. How do those two worlds tie together?

Bradley: Well, I practice using music as a form of yoga and by yoga, I mean, skilling the mind, controlling the mind and finding union with something beyond being an individual.

There’s this sense that creativity actually comes, from a kind of mysterious place. I can say that I wrote a song, or we could say that we wrote something but ultimately that song wrote itself and we were just the vessel through which it came. So I feel like music and yoga and meditation are quite linked in that they, connect us with the mystery of existence and, teach us more about ourselves in do by doing so.

Are there elements of those ideas and that mindset that you think other artists might find beneficial?

Bradley: Good question. I think a lot of musicians actually already have it in my experience. There are a lot of musicians who are sort of tapped into something. They’re aware of some things that a lot of people aren’t aware of, though it’s hard to quantify and put into words what it is.

Vanisha: The inspiration to express life or express themselves comes from something. I mean, for me, I believe that everyone has an innate musicality. I actually teach vocal improv and help people to open their voices, because I believe that once you connect into this joy and this sense of awe of the world, we can’t help but sing.

So I think that spirituality and music and expression might come hand in hand, it’s just tapping into it, which I think a lot of musicians do without realizing. A lot of artists through history have said that they connect, they like talk about this grand, sort of innate thing, like the creator, or the mystics; the mysticism of life.

Bradley: I studied Nada yoga in India, which is the yoga of sound and music and I found that in studying there’s a lot of things that I kind of knew already, but it just gave me a language to explain it and turn it into something that is a continuous practice. So now I’m intentionally using music as a way to learn about myself and connect with the source of creativity.

Could you describe the atmosphere at one of your gigs?

Vanisha: We just recently have been doing our, like, set songs. But we’ve done a lot of l improvised gigs as well… We would always create something that kind of connects in with the audience and somehow we create a song that everyone resonates with. All of a sudden the whole room is jumping up and down! We don’t really know what’s going on, and they don’t know what’s going on. Everyone’s just in it. It’s a lot of fun.

People end up getting quite creative! I don’t know if there’s something about our synergy that gives people permission to let loose a little bit.

Was there anyone specific that got you interested in and involved with playing with loops in your arrangement?

Bradley: Yeah, Xander. There’s a few friends who use loop stations. I think I’m more inspired by friends and musicians that I know rather than the artists that are on the radio.

Are you still based in Bristol?

Bradley: We just moved to Devon two weeks ago.

Devon? That’s quite a change. What inspired the move?

Vanisha: We kind of wanted to get away from the city and the lockdown, just get connected with nature. We enjoyed the stillness of lockdown actually, so we wanted to be able to create an environment that was more still, so we could work on our creative projects.

We’ve got an album coming out (well we need to make the album!) but there’s a lot of work with other producers and things. Being in the space of quiet will be very helpful for just focusing and knuckling down on what we need to do for that as well.

Vanisha: We get too distracted in the city, there’s too much to do.

Because, Bristol’s a very creative city, I guess it’s got a very specific vibe, I was wondering if that had any influence at all and on what you were creating at the time. Do you think what you’re producing here is going to be any different?

That’s a good question and I’ve thought about it. I haven’t actually written anything yet. I do think that the music has been heavily influenced by bristol. There’s a Bristol sound that definitely exists. There’s like a lot of people who do a kind of ‘rappy’, acousticy type of thing. I see that I’ve incorporated that.

I don’t know if I brought it to Bristol or Bristol brought it out of me, or whether I was attracted to Bristol because of it. I’m actually from Cumbria initially. It’s a very different vibe.

If you could meet one musician, alive or dead, who would it be?

I mean, they’d be alive when you met them!

Bradley: Yeah, we’ve been hanging out with Mozart’s corpse!

Actually, I just mentioned Mozart. He’s not exactly related to the type of music I make, but I suppose he is in terms of the seed of where music went from there. Mozart was a bit of a genius, I love his music.

Do you think he’d be entertaining to hang out with?

Bradley: Apparently he had a very good sense of humour.

Vanisha: I love Queen and I think I would love to meet Freddie Mercury just to have the time to spend together. I just imagine voice jamming and going a bit crazy. And also seeing, there’s this kind of … I don’t know if I would call it a madness, but a lot of the really famous artists it came up and almost consumed them. I’m just curious about that and seeing how that changes them… and what to look out for! *laughs*

He was such a brilliant performer and that inspired me so much. I’ve got quite a big diva inside me. So he’s a big inspiration.

What’s your experience of Camden?

Bradley: Camden is great. I grew up listening to punk rock and for me it was like a Holy Grail It was like the sacred land when I was younger.

Vanisha: I used to live in London and Camden was this place I had been hanging around a lot. We’d love to play there when all of this is over.

What’s next for you?
We’re going to share the journey towards making an album on our social media. We’re learning as we go along. We’re the artist and the record label and it’s a big learning curve. We’re looking forward to sharing that journey with people.