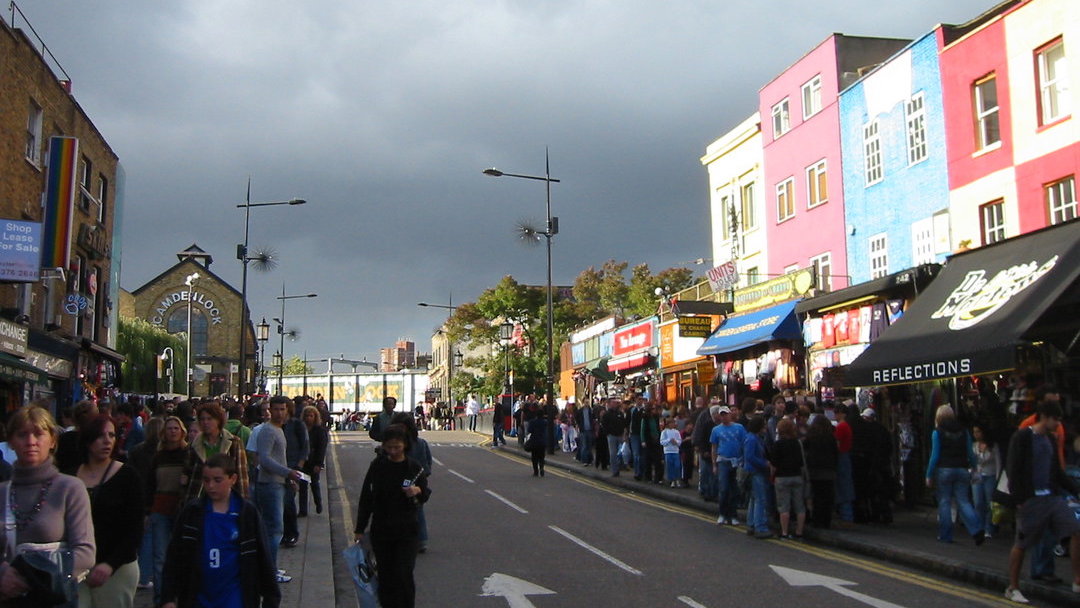 If these streets could talk, there’s no telling what secrets they’d spill. What world-known musician may have chundered outside the pub after one too many? Where may the Ramones have huddled round to have a smoke in between recording sessions? What rock stars have fallen asleep in a drunken stupor on these well-traversed, dirtier-than-imaginable streets? We’ll never know. But some things we do know – some remain in the collective consciousness, or have been immortalised on film, so that music lovers can walk these streets and marvel.

This – is the definitive Camden music walk. These are the ten music legendary music hot spots that will make your legs shake with musical poignance.

We start our walking tour, of course, at Camden Town station.

This is Camden’s answer to the Hollywood walk of fame. Walk out of Camden tube station and you’ll find the records that have been made to honour our musical greats.

Inaugural stones honouring different musical greats have been laid down, and many more plaques are planned to be laid out over the next two decades. Legendary rock band, The Who, were the first to be immortalised on the walk – you can see the plaque at Brittania Junction outside the tube station. Hugely popular Camden band, Madness, and the one and only Amy, have also received their stone record.

Wishing everyone a very Merry Christmas from all of us at The Music Walk of Fame. This winter saw the launch of our project after much await, with the legendary and iconic The Who being the recipients of our inaugural award, along with the founding stone being laid in the historic Camden Town. Stay tuned in 2020 as we continue to honour the international legends, influential contemporary artists and unsung heroes of our industry.

As we make our way towards Stables Market by Camden Lock, you’ll see the legendary Electric Ballroom to your right. This place has hosted some of the biggest names in musical history, including The Rolling Stones, The Clash, and David Bowie.

There is also a beautiful graffiti artwork of Prince nearby.

Unusual to see Camden like this on a weekend. Stay home, and support the Camden businesses by ordering online. Check www.camdentownlondon.co.uk to see the businesses. 📸 by @madeinbrasiluk #london #camdenmarket #camden #camdentown

It’s good news for Clash fans. Inside the market, you’ll be able to see both their recording studio, where the legendary punk band recorded their debut album, as well as the alleyway where the cover of their first album was shot in 1976. The recording space, which was called ‘Rehearsals Rehearsals’, is located to the left of the entrance to the Stables Market. The alleyway where the iconic cover was shot is directly across from the recording building’s front door, and you can still see it today – though it’s changed a little from when The Clash stood on a slanted alleyway scowling to the camera.

This life-size statue of one of the most talented musicians to ever come out of Camden pays homage to her life and work. The bronze figure stands proudly overlooking the busy Stables Market. Unveiled in 2014, the statue brings Amy back where she belongs – to the center of attention, in Camden.

Originally a railway repair shed built in 1847, The Roundhouse has been known as a dedicated music and arts space since the 60s. This place has been central to great music – Pink Floyd played their first ever gig here in 1966. The Doors played their one and only gig in the UK at the Roundhouse in 1968. Many say The Ramones’ gig here in 1976, when they were visiting from across the pond, is when punk was born.

This is the spot where Madness took the photo that ended up on their iconic album Absolutely. Be sure to have a look around as you walk up Chalk Farm Road – this is an area where plenty of rock’n’roll greats have roamed. This happens to be where Prince once opened up his own boutique in the 90s. With a storefront painted entirely purple, the shop saw huge queues of music fans lining up to get in. Sadly, the boutique was short-lived, so you won’t be able to catch a glimpse of that purple wonder nowadays.

As we make our way back down Camden High Street, cut off to the left to check out some street art.

If you’re a fan of street art, Camden is the place to be. Hawley street and Hawley Mews is a great example of this, and you’ll be able to see several pieces of art. You might be most interested to see Camden’s darling, Amy Winehouse, immortalised by Otto Schade. This piece has been here for years, and is well-loved in the area. As a Camden local, many street artists have chosen to portray Amy in the years following her death. Hot tip: If you’re a Winehouse fan, you may want to nip over to 30 Camden Square, just a short walk from Hawley Street. This is where Amy lived for several years, and it’s where she tragically passed away at the age of just 27.

As we come back to Camden High Street and pass the water, take a detour to your right to check out a little unknown gem.

The long-standing Arlington house is a hostel for homeless young people, established way back in 1905. It was once the biggest homeless hostels in Europe, and was hosted George Orwell among other greats. You may have heard of the House in Madness’ song “One Better Day” – the band stayed at the hostel for a while before their music career took off. The Pogues also reference the House in their 1984 track “Transmetropolitan“. The building has undergone refurbishments in recent years, and but you can still have a look at the outside if you’d like to see for yourself where Madness’ humble beginnings began.

From here, we’ll walk down to Parkway, where you’ll be able to see the legendary music venue Jazz Café. And just a stone’s throw away, feast your eyes on that famously red façade – The Dublin Castle.

A regular haunt of Camden royalty, Amy Winehouse, who was known to pop behind the bar to serve customers on occasion, this trusty old boozer-cum-music venue has been hugely popular since the 50s. Consistently putting on some of the most exciting bands out there, this cosy pub with its intimate back room for gigs is a Camden icon. Madness made their name here. Muse was signed in the pub after a particularly good gig. Robert Plant came to a Led Zeppelin tribute night here. The Libertines have played many a rowdy gig here. In short, it’s a top-notch place.

Hot tip: while you’re here, be sure to pop into Rock’n’Roll Rescue next door – this tiny little shop holds all kinds of hidden treasures related to music and the Camden scene, and the money goes to charity.

As we leave the red glow of The Dublin Castle, we’ll head down towards Mornington Crescent to see one of the most well-known venues in London.

In the 70s, it was known as The Music Machine, and was hugely popular among Camden’s many punk rockers. The Clash had an infamous 4 month residency at The Music Machine and it also played host to musical greats like The Sex Pistols and Iron Maiden. This iconic spot happens to be where Bon Scott, the lead singer of AC/DC spent his final night. Scott tragically passed away from alcohol poisoning in 1980 after a long night of drinking and partying in Camden. A few years later, the venue changed its name to Camden Palace, and later changed its name again to Koko.

When the iconic building caught fire just a couple of months ago, there was a massive outpouring of support for this legendary music venue. This infamous venue is under reconstruction after the devastating fire, and will surely be back to host some of the best in the music industry once more.