Camden's Future Is Up In The Air

Camden's Future Is Up In The Air

The Camden Highline seems like a really good idea and it has gotten some good coverage and generated interest – but the funding concept doesn’t make sense. Asking the public to fund around £35 million when Camden Town is being flooded with £ billions in new property development money is dropping acid into gentrification wounds. Why not get this funding directly from the government or property developers or big corporates that come to Camden to exploit the community and location?

The concept is wonderful to link Camden with Kings Cross – but of course, you can already walk there on the canal. This is more of a destination/entertainment idea.  Check out all the designs that were not selected here.

Perhaps it’s a cynical view to think also that £35 million might be better spent on the ground to help businesses recover once the covid crisis releases its grip from us, rather than focus on a new leafy space high above all the problems.  Music venues like the Black Heart are facing closure and the high street has a significant number of closed-down shops stretching from Mornington Crescent to Chalk Farm. And there is still an open question on when tourists, who account for maybe 80% of retail sales, will return in large numbers. So, is it really the right time to ask an exhausted local community to build a new walkway?

Camden Town Unlimted (CTU), which runs the Camden Business Improvement District (BID) is a paid advocate for local business, is all-in that the Camden Highline is a winning concept. Their logic makes a lot more sense than their funding strategy. From the Camden Highline website on progress so far – “We’ve raised enough money to undertake detailed design and apply for planning permission. We held an international competition and appointed a team led by James Corner Field Operations, working with Kentish-town based firm vPPR.” However they also note that the project will take “years rather than months. The sooner we raise the money, the sooner it will open! Until we have funding confirmed it is impossible to give a timeline.”

CTU is funded through a mandatory levy on business operating within the district. A BID is obviously confusing if you think that Camden Council was actually already meant to help businesses that pay rates and taxes. If you pay more than £120,000 per year in rates you can vote for the BID operators for their 5-year contracts, which is a strange form of taxation = representation. So it seems like CTU has an unfunded project and now needs to rally support not just from the bigger businesses that voted for them (and potentially won’t even pay for it), but also the general greenspace-loving public. 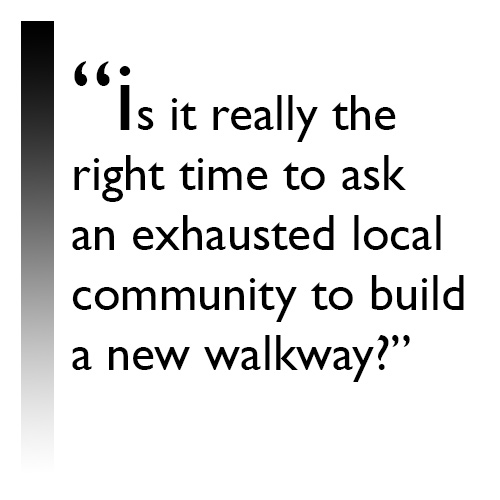 BIDs are also facing their own challenges as smaller businesses are resisting paying the mandatory levy on top of the already heavy business rates.  A BID is a sort of government pro-business association that any business within the approved zone is forced to be a member of.

Certainly, it would be nice to have a plant-covered outdoor space enticing people to walk and get new views on the area.  The Camden Highline also seems a lot more serious and better conceived than the fiasco of Boris’s Garden Bridge which cost £53 million and construction there never even started (and contractors still got paid). The success of the original Highline in New York City has inspired this project, but that is a different area that needed to transform itself during different times.

Check out the info on the 1.2km stretch of track that might be transformed over the next three years here on the Camden Highline website.

There is a potential wrinkle in the mix as according to the Camden Highline site – the use of the rail space is only temporary – “Network Rail own the infrastructure the Camden Highline would re-use, and they may need it for rail use at an unknown point in the future to increase capacity on the North London Line.” The Eiffel Tower was also meant to be temporary.

Like the Manhattan operation, The Camden Highline is looking for community support = donations from people to build and operate the new space.  If you give £80 you get a tote bag. Yet, there was no disclosure on the site about how much has been raised so far or where the donations might have come from. And does the £35 million include maintenance or will that also need crowd-funding? It all seems vague when they are asking us for real money.

Further, Camden already has canal stretches that would benefit from improvements and better maintenance. Why create a new space and have to maintain it, when the canal areas are rundown? Good round-up of other London walkways here by Oliver O’Brien.

London often looks across the Atlantic to copy things that work – like when Ken Livingston brought in Subway Czar Bob Kiley to transform the Tube.  Kiley famously noted that London was marginally less centralized than North Korea. Kiley was also well-known for his massive pay and his lavish expenses charged to London.

So, probably we can be forgiven for being cynical and a bit jumpy when mayors, councilors and members of Parliament think something is a great idea – especially when they don’t have to pay for it. “This innovative project has the potential to become a real asset for Camden and is a great example of a local community taking an idea and garnering support in order to make it a reality. I look forward to seeing it develop.”
says Sadiq Khan, Mayor of London.

Camden is, as always, in flux. Now there are several enormous developments upscaling the area. LabTech is reimagining the very heart of Camden with a the massive 20-acres of retail/flex office/hotel/flats across Hawley Wharf and Camden Market Stables. LabTech has plowed something like £500 million into the area. Rumors were flying in June 2019 that the whole package was going to up for sale for £1.3 billion. That’s a big potential profit to take and a valuable asset to protect. Maybe there’s reason to make some offer of gratitude to the area by funding something like the Camden Highline?

According to the Camden Highling website – “Property prices around the New York Highline rose by 200% during its construction.”

The Camden Goods Yard is another project – in the £600 million zone – underway where Morrison’s used to be, to create 700 new homes – which the website refers to a Manhattan 1,2 and 3 bedrooms. The developer is already asking to increase the number of units by 75 which presumably will make the buildings taller no doubt, further adding to the Stratford-level of charm this complex brings to the area. By the way, 75 x £300,000+ is plenty of extra cash to make a big donation for the benefit of the future owners.

The developer notes that 35% will be affordable housing. Hopefully, unlike in Battersea where affordable housing is in a ghetto under floating swimming pools, these won’t be segregated via “poor doors” — which is some evil and common practice in the UK.

And who might buy some of these new flats – probably the developers are hoping that parents of Chinese students will continue to want to drop millions into London property and get Tier 1 Visas.  Real estate agents Knight Frank cite £500 million in property sales to Chinese buyers in 2019.  But that was before the pandemic. More reports suggest that interest is waning in London, so it’s a big gamble on who wants to drop cash into Camden in what appear to be pretty bland, post-modern residential assets.

Plus there is the epic development at Kings Cross driving a whole new set of people up the Regents canal and into the Stables area. Amongst large corporate bases for Twitter, Facebook and more, this is the new home to Google with their landscrapper which is a horizontal building for 4,000 workers and equivalently 20 meters taller than the Shard. This building will have a lot of open space and trees, but not for the public although dominating the public view of Kings Cross. 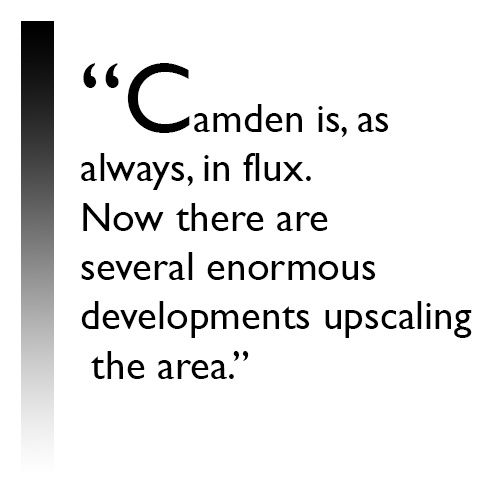 One might have expected the developers and global corporates to chip-in for the £35 million to add value to their investments, rather than asking the community which probably will get pushed-out as rents increase,  to once again dig into their pockets during these tough times. I guess the CTU is representing businesses and didn’t want to challenge them to fund this themselves more aggressively? But isn’t the CTU ultimately funded by the customers who visit the businesses that pay the extra bump on the business rates? Shouldn’t they advocate for the consumers as well?

It really feels like asking the public to donate to the Camden Highline is another stealth tax, this time camouflaged in biophilia. The Council has a lot to gain with the increased business immediately translating into tax and rates revenues. Camden has tons of assets it could sell-off to more than cover the funding needed. The property and corporates will get massive lifts in their asset values and user satisfaction. The local community is already paying for these types of benefits but not getting them.

At least as local people get priced out of their homes and small shops, they might come back, take a walk amongst the railroad ties and tall potted grass and look down at where they used to live and work knowing that their donations made some of the gentrification possible.  It’s hard not to be cynical.