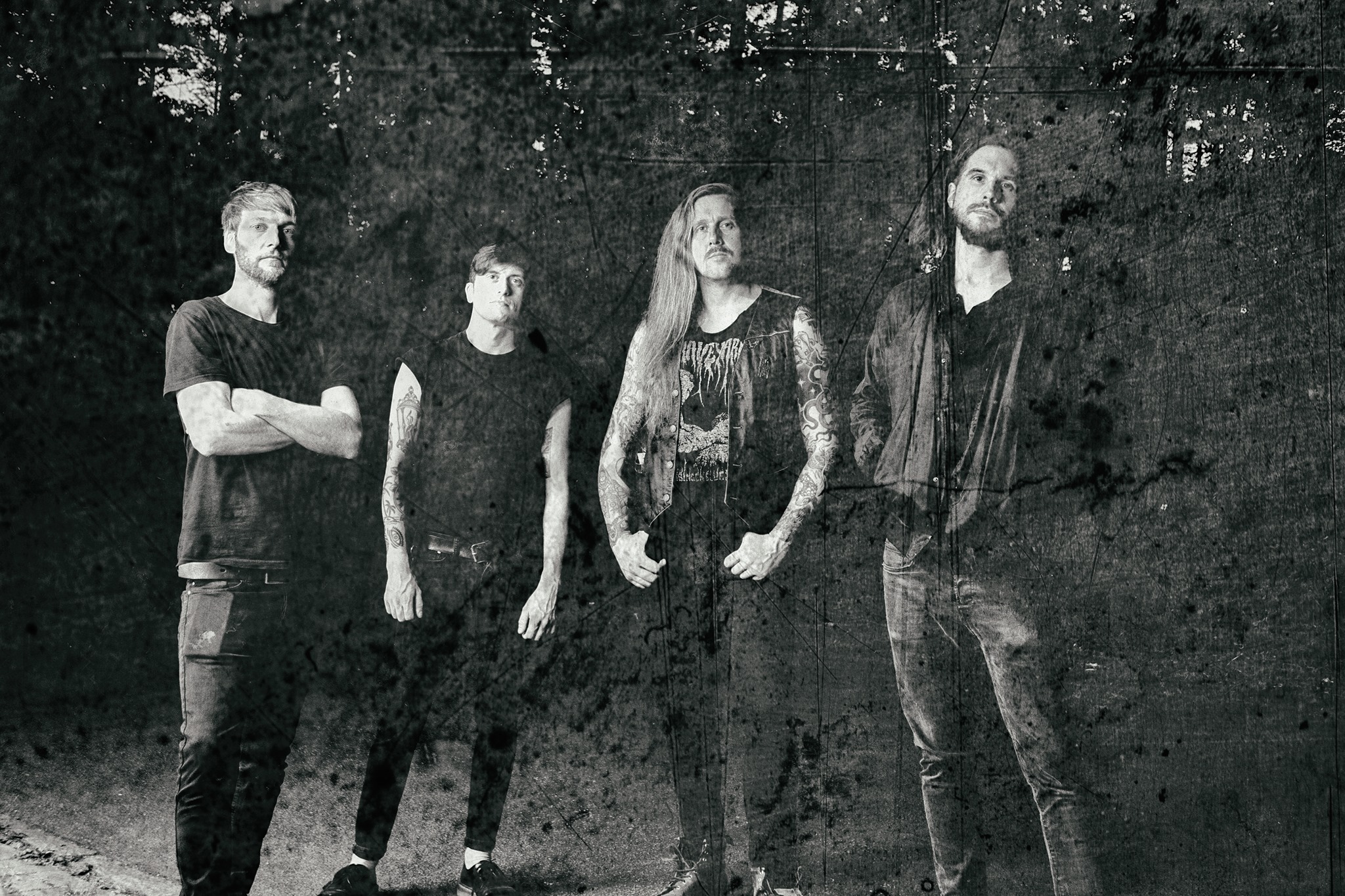 Though their dark brand of guitar-heavy instrumental music often sees them draw comparisons to the poster boys of post-rock, Explosions in the Sky, Neànder’s influences are much deeper and wider than the niche label implies.  Neànder strengthen and diversify their epic instrumental formula with elements of seventies hard rock, metal and stoner rock (Just listen to the riff halfway through ‘Aăs’ to hear all that riffy goodness summarised!)  Think Godspeed You! ‘Black Emperor’ and APC, chilling with Black Sabbath atop a mountain under the stars, watching 65DaysofStatic and Kyuss duel for their souls.

I caught up with guitarist, Jan to talk about how the band came to be, being pigeonholed and their surprising influences…

How’s things over there?

Pretty cold. We’re in lockdown number two and the numbers are still growing. So I think we will have a harder lockdown by next week.  So just sitting at home, playing guitar and working from home.

I’ve been working on a new project with Neànder and we just released the album in October. So I just started something new. I also work for a record label called Glitterhouse Records, so to be honest, I’m pretty busy.

Can you tell me a little more about what you’ve been up to with Neànder?

We did two live streams.  One was for a festival called the Orange Blossom Special Festival back in August and one month after we did a live stream for Rockpalast, which you may know in England too.  That was streamed at the beginning of November. We’ve just released our second album and the tour was planned for February and March, but we’ve just postponed it. We’re currently looking for new dates, hopefully we can get some in the winter of 2021. I think there’s a good chance that some of the smaller venues can open up again after the summer, but let’s see. It’s all guessing.

So, how did you guys all meet and decide to play together?

We started the band about four years ago. At first it was just me and the drummer.  We started jamming around and we finished one song which ended up on the debut album, entitled Moda.

We had recorded a demo, but we had no singer at this time and none of us can sing ourselves so it was entirely instrumental. Some friends of ours heard this and told us that this would work without a singer, so we decided to keep things as they are.

We finished the demo, and sent it out to Pat and Michael who were friends of ours.  They immediately joined the band and then we just finished the first album.  But this was over a period of about three years, so it wasn’t a speedy process; we took our time.

You treated us to a second album within short course though. When did that come out?

October 9th.  We released our debut album in 2019 and then we went on tour and started writing the second one just at the beginning of this year.  It took us six months and then we went to the studio and just released it.  It doesn’t feel right just to write the next album because going year to year to year feels like a little bit of a rush. I think it will take some months before we start writing for Neànder again.

We had the idea of a new album in December.  It took a period of six months to write six new songs, then we took them to the studio. So we had the idea already back then to entitle the album ‘eremit’ (English Translation: ‘Hermit’).  This was way before the pandemic but we saw that the title of the album really fit the situation so we stuck to this idea.

So I guess you haven’t had the chance to play those songs live then, aside from the live streams?

We’ve played one of those songs on the live stream, but we didn’t have a concert at all, so we can’t wait to get on stage!

When you take songs out live, do you find the arrangements evolve at all or do they stay pretty much as you recorded them?

They can’t be the same, because [when] we’re in the studio we have drums, bass and tons of guitars. Live we have three guitars and one drummer. So we have to play the tracks a little differently. I kind of play bass and guitar at the same time, because I just split the guitar signal and put it through a bass amp. So, we find new arrangements that are pretty close to the album version, but it’s not the same.

Is that in your head when you’re arranging the originals?  Are you thinking about how you’re going to pull it off live or is that something that you don’t worry about when you’re writing for the record and file it under ‘cross that bridge when it comes to it’. . .

I think you shouldn’t worry about it. When you write a song, you should just make it as good as it can be and don’t restrict yourself by thinking about whether you can play it live. Finish it and then when it comes to live rehearsals,  find an arrangement that transports the main ideas the best.

Do you find you miss the other parts of your arrangement when you go out with a stripped down live line-up, or do you find it takes on a different energy?

No, I think maybe we played live a bit faster, but only a bit. The live arrangements are more intense because you have all this energy and all this adrenaline and people start to play real heavy on their instruments. I think it’s quite a different energy.  Maybe it’s a bit like a punk show! *chuckles*

Are you all part of other projects as well?

Our drummer, Sebastian Grimber, he used to play in a band called Earth Ship, which is kind of a sludge metal. I met him when I played in a post black band called AND. We also met Patrick there.  Michael played in a hardcore band called Patsy O’Hara.  I met him when we played together for a friend of ours called Casper who was a very big Indie Rap artist in Germany. So he’s headlining festivals, like Rock Am Ring and such.

There’s quite a diverse range of influences there.  When you’re writing music for Neander, do you have a particular sound in mind? Do you think ‘This is going to fit into this genre’?   Or do you just kind of bring everything that everybody has to the table?

I think it’s a little bit different within every album.  On the first album, we’d just started the band and needed to find our way. We needed to find how the picture should look in the end. It was more of a search I think.

On the second one, we limited our own scope so that we could find our own style a little bit more. The first album you get a bit of doom for example, then there’s this other emo part and a sixties rock part . . . etc. There’s a little more from every genre in there. I think the second album is a bit more intense to listen to.  It’s more determined.

When you start writing it’s always a little bit different, but what you shouldn’t do is set out to sound like a particular band, because then it will sound like that band!

Despite your diverse influences, as an instrumental band do you find you tend to get pigeonholed amongst the post-rock acts at all?

When it comes to instrumental music, you’re always going to get compared to Russian Circles, Explosions in the Sky, Pelican but I think we sound quite different. I mean, it’s a bit like if you’re into punk and people are always telling you that you sound like NOFX, Green Day, or Pennywise; of course it’s the same genre, but all of the bands are very, very different in my mind.

Who are you listening to at the moment?

I’m listening to a lot of stuff like William Tyler, which is ambient country. So Country without vocals.  Sounds a little bit like Explosions in the Sky versus country. It’s very, very beautiful. I highly recommend it. I listen to a lot of YOB as well. A good part of the current situation is that I have enough time to listen to music.

I’m also listening to a lot of Mercyful Fate again and a lot of old school metal.  I have to say that I really liked the new AC/DC album, which kind of surprised me, but there’s some really good songs on it.

Who’s your biggest influence as a musician, personally?

It’s a very personal question because I think within the band; everyone would name something different.  I don’t think that you hear it in Neànder because it’s very different, but I was heavily influenced by the way Slash from Guns and Roses plays.

I’m going to ask you one of my favourite questions:  Is there anyone that you’ve been compared to a lot, that you’re not happy to be compared to?

But I just have to say no!

Well, that’s good!  So to follow that up, is there anyone that you’d like to be compared to but never have been?

Oh, that’s a tough one.  I mean, it’s a tough one because in the genre there are not so many big names as in other genres.  I’d always like to be compared to bands like Blue Oyster Cult, Mercyful Fate or Thin Lizzy, but it’s a different type of music!

What do you think the ideal environment to listen to the band in would be?

I really like to listen to this kind of music when I’m alone, with headphones on, or maybe… in a sauna?  Is that the English word for it? So when you’re really relaxed and you just put it on, then you’ve got 40 to 50 minutes of just instrumental landscape. I think this is really good.  But also it’s really good to listen to live.  Just bang your head, drink your beer and all that stuff. I think that works too!