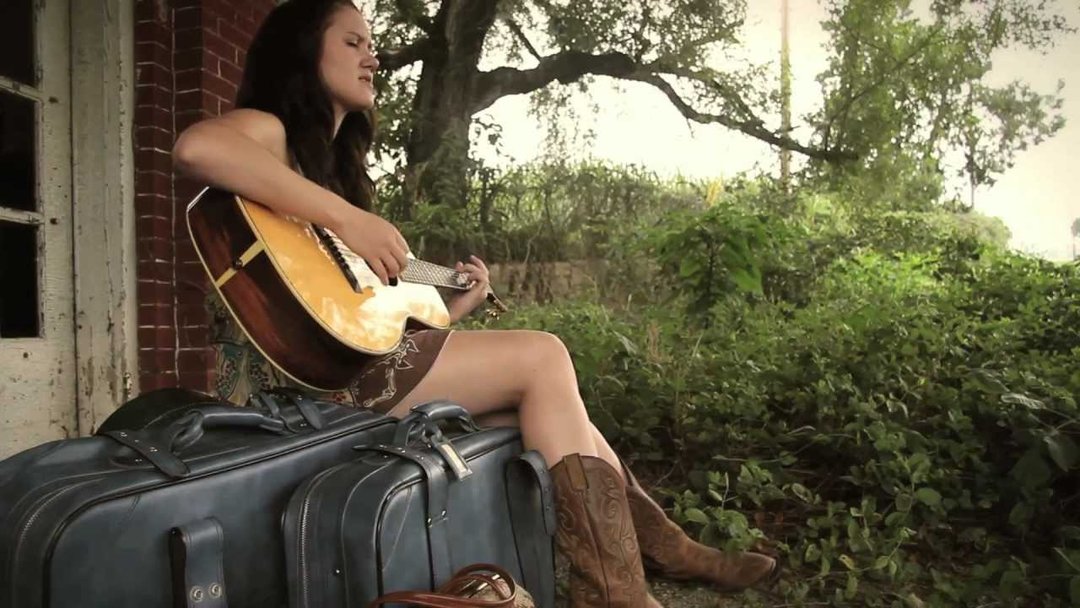 Whilst we’re all locked in our houses (well nearly all of us, judging by the news this weekend) music feels more important than ever. The doors to Camden’s venues might be closed right now but we’re keeping their spirit going with our series of Camden Live Livestreams. Bringing some of our favourite artists from their living rooms to yours.

We recently ran one with the fantastic Grace Pettis. Grace Pettis is a country, Americana singer-songwriter who’s riding out the lockdown in Austin, Texas. We caught up with her between songs to find out how she’s finding the world at this strange time.

JH: So how are you doing Grace?

GP: I’m doing good. It’s a real rainy day here in Austin. It’s just coming down cats and dogs. So I feel like I’m back in England. Very apropos. Actually my last gig was in Camden. Where we met. So I went home and I was immediately in quarantine for 15 days. I’m fine- just a precaution.

JH: So are you just writing songs every day? Just knocking them out!

GP: Actually it’s been a little less than normal. I’ve only done about 2 since mid March. Normally I write a lot more than that but I’ve had a lot going on.

SM: So when did you start writing music?

GP: I think I was about two. I used to walk around the house and like musically narrate my life. Like: “I’m going to the bathroom and I’m gonna tie my shoe.” And I kind of never stopped. I began filling up notebooks and have been ever since.

GP: I am. My father is a singer-songwriter and my mom is an English professor. She lives in Ireland and she plays as well and loves words and music too. And I have two brothers who are musicians.

SM: Do you ever collaborate with any of them?

GP: We did this Christmas show in Atlanta. But it’s like herding cats with my family. They’re big personalities. So occasionally we will. My dad and I tour a little bit together. But no, not really.

JH: Did your mother try and talk you out of being a singer?

GP: Yeah, both my parents actually- after they got divorced. That was their united front. That they didn’t want any of their children to go into music. And all of us play music now.

SM: Well we all always do the opposite of what our parents say, right?

GP: Absolutely. I mean my dad was always like “Get a real job!”. And you know, my mum always really loved poetry so I would think: “Poetry must be really lame because my mum likes it.” I was an idiot. We are all are when we’re kids, aren’t we?

JH: So you say in your song “Landon” that you miss your friend Landon? Is that because you guys never got to settle this issue?

GP: Well we did with the song. We kind of drifted apart and I spent a lot of years writing and re-writing this song. And I sent it to him because it was all the things that I wanted to say but I couldn’t say adequately in a phone call or anything. And now we’re a united front behind the song- trying to get it out into the world. He’s a great guy. I’m very lucky to have him in my life.

SM: Were you planning to tour over here this summer?

GP: The timing with all this for me has been eerily perfect. I had my last show in Camden and then I had a flight booked that weekend. There was some re-arranging because Norwegian Air lost a lot of business that day but as I was on the plane and at the airport, the rules were changing. And on the plane as I was crossing the Atlantic the rules changed again and UK nationals were now no longer able to enter the US. So all of these people on the plane were having to re-book flights. It was crazy. I really hopped on the last train out of there, in retrospect.

SM: How’s it been to been in lockdown? As a musician?

GP: It’s weird because as a musician so little of your job is to be on stage. It’s mainly rehearsing and sending emails and conference calls with management and booking labels and so on. And so we’re still doing that and I’m gearing up to go back in the studio and record my next record and plan for a 2021 release.  But there’s this huge component- that’s the live performing- that’s just gone. So all that income has just gone. So it’s odd because I feel employed and I’m still working but I’m really not making any money. So it’s a Catch 22 because eventually I’ll have to go and get another crappy job, which I haven’t had to do in a while.

SM: Have you got Patreon?

GP: I’m working on that! I’m in a weird position because I have a publishing deal so I can’t just release demos and things like a lot of my friends on Patreon are doing. So I’m starting a podcast but I need to get my label to sign off all of this. I want to be a good team member with them.

SM: I think it’s a great platform- it’s a real space to make income and network on a monthly basis?

GP: Yeah absolutely, I’m in the middle of looking into it and drafting one. And there’s other things I can do like privately streamed concerts or lyrics so I’m figuring out ways to structure things. But all of it’s really new. It’s a learning curve. The new technology for a start.

JH: Gets in the way of writing songs?

GP: It’s a lot, but I feel like I’ve learned more in the last few months than in the last year.

SM: Yes we’ve all got to adapt to this new world.

GP: These lessons are valuable. Whatever happens.

Check out the rest of the live stream here: