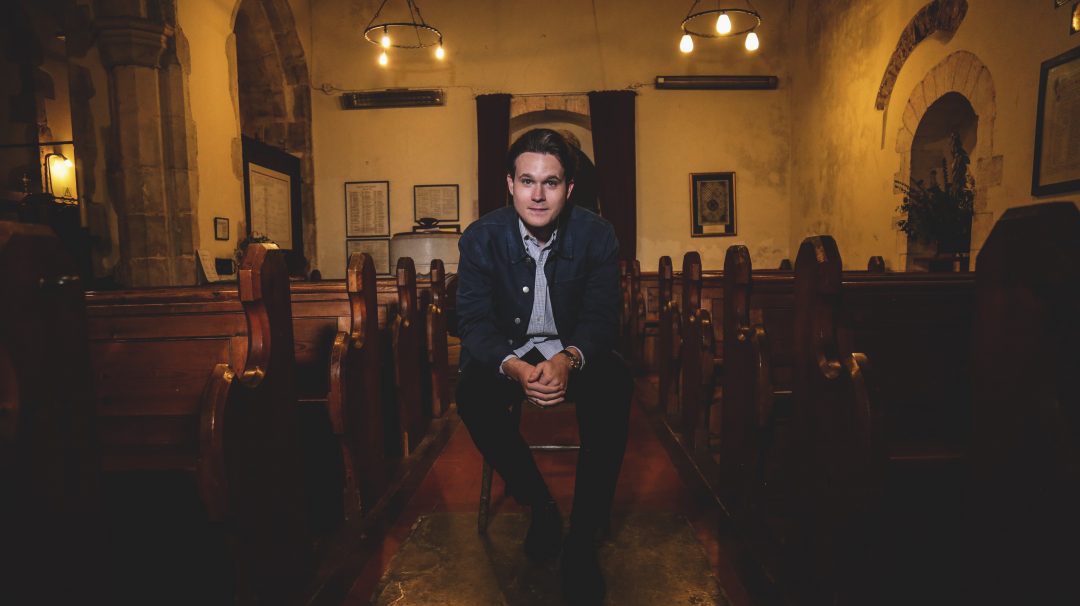 Last Friday on the Camden Live Lockdown stream we played host to Luke Jackson; an accomplished, homegrown singer-songwriter from Canterbury, Kent.  He writes, soulful, intelligent songs drawing upon the healthy influences of the grassroots genres of folk, Americana and Blues and has toured them around the world including performances at the International Folk Alliance and joint headline tours with Grammy Award winning songwriter Amy Wadge and Folk Award winning duo Greg Russel and Ciaran Algar.

It kind of seems that, I grew up on so much blues. So, Americana and folk, I think naturally all of those genres merge and influenced my song writing in different ways. I find the latest stuff now seems to be a little bit more bluesy than the early stuff. The clip you showed there earlier on that introduction piece was with my trio…

…Having those boys being able to kind of put down bass and drums and  they both sing as well, so we can harmony parts to it all.  It’s become a thing now.  When I write a song I think, “Ahh, this would sound so good with a band as well.” So I can almost cater my writing a little bit to that as well, which has been fun.

The first track Luke performs for us is a relatively new offering, an upbeat yet soulful track called ‘Curse the Day’ crafted around blues-tinged guitar lines which ring of the great John Martyn, and a powerful yet seemingly effortless vocal drenched in an appealingly humble charisma.

Next up is ‘Heavy’.  A track which shares the same bluesy guitar stylings  but moulds them into an emotional folk-rock ballad with soaring vocals and particularly poignant lyrics.

Just before Christmas, I released my newest album, an album of mine called journals. For the first two months of this year, I was able to tour it. I went around the UK got a bunch of dates and a bunch of dates around the States as well. But this was the first track I released from that album. This is a song I wrote about the issues and the problems surrounding male depression and the ability to just be open about it and talk about it and why it’s such a taboo, I’m unsure, but I wanted to write this if it could help in any small way, then that was enough of a reason, really?

For the next track, we’re treated to a beautiful rendition of Bod Dylan’s blessing on his son, “Forever Young”.

I just love this song. This is one of my personal favourites. I think this is one of the most beautiful songs ever written. For my sins, that was a song of his, that I wasn’t overly familiar with in the early days.  I grew up on a lot of Bob Dylan. My Dad is a big fan of all of that.  He raised me on all of that kind of music but for some reason that one slipped the net and it was only a few years ago I heard it.

It wasn’t Bob Dylan’s version I originally heard. It was on the series sons of anarchy.  The soundtrack of that is incredible. It was a female singing that (version), and then I later found out it was a Bob Dylan song and just had to cover it.

Next in the set is an example of Luke’s earlier work, from his mini-album, ‘This Family-Tree’, called ‘Is It Me’; an honest Country-Rock/Americana confession of love and remorse.

Its one of the oldest songs I play. I think its naturally evolved so much over the years. I still play it a lot these days, but it’s funny looking back at those videos and thinking, “Oh, I remember I remember doing that”

Luke has been noted on many occasions for the maturity of his writing, but his start in music came at a young age. .

As soon as I was able to play anyone else’s song from beginning to end, I just figured ‘d try and write my own. To think I’ve been writing songs for that long is amazing.  I did a Facebook live a few weeks back, and played through my debut album, which was released in 2012, which again, just shocked me at how old I was. Although it was released in 2012, a lot of those songs I wrote when I was a lot younger. There were songs in there where I was writing about the worry of leaving secondary school and things like that. So it’s, crazy to think that that they’re still getting played and they still have legs to them. It’s an incredible thing really.

When asked how he first came to start playing music, Luke told us…

I think initially it was probably my Dad.  He’s kind of a closet guitarist. He never goes out and gigs or anything like that. He just has a guitar in the house and he loves music as well.  So growing up, I was listening to albums like Bob Dylan, guys like John Hiatt, Richard Thompson, the Beatles, old blues music.   I always took an interest to that and the storytelling. Early days I had no interest  in the learning of music.  It was more just an interest in it as a whole and as a spectacle.

Then I just remember one day, I was about 11/12 years old I think, I just was watching my dad playing a guitar and saw the joy he was getting from it and thought “Could you teach me a few chords and maybe I’ll enjoy it?”

I picked up and it felt quite natural and I went and got guitar lessons for a while on the electric at first to learn all the fancy soloing, and then singing kind of came hand in hand with that. At that time I was the only one of my friends that was playing music. So it made sense to kind of learn to accompany myself within an acoustic as opposed to an electric.  Then that kind of stuck really. I’ve been kind of focused on that ever since.

Luke also plays live as part of a duo and a trio, and has recorded albums alongside those musicians as well as having gigged with them extensively.  Though lockdown has prevented them getting together and working on anything, Luke’s been looking forward to getting back together and jamming.

It’s been lovely being able to have a reason to pick up a guitar and write an aside.  For my own entertainment to be able to do this is a reason, of course and to keep on top of my songs and keep playing and performing. But it’s been on my own now for a long time so the idea of meeting up with the boys and just singing some songs together and playing some music, sounds like a lot of fun. So we’ll have to do that in the garden at a 2 meter radius!

The last tune we’re treated to is the last song from his current album, ‘Journals’, a woeful and reflective folk tune that sits somewhere between that brings to mind both James Taylor and Jeff Buckley at his barest.

I’ve been writing a lot in lockdown. I kind of set myself a bit of a task to write. Whether that’s going to be released on an album separate to anything I’ll do in the future…I could maybe put that on a lockdown sessions album or anything like that, or just to have that as music and future. But really, I was fortunate. I had a very busy start to the year before lockdown was put in place. So I managed to get the majority of my tour done before this all kicked off, really. I’ve still missed out on a bunch of gigs and there’s a load of gigs. I’m meant to be in America doing a tour October, I’m meant to be touring in Europe at the end of this year in December. So whether that’s going to happen I’m unsure but at the moment, I’m kind of just keeping myself busy by writing and doing this kind of stuff. To be able to have a form of connection.

It’s been lovely doing this. It gives a reason to get up and get dressed. So that’s, that’s enough for me at the moment.

If you’d like to discover more of Luke Jackson,  you can find him on Facebook, on his website at or check out  the Spotify playlist below. And of course, don’t forget to catch his performance on the highlights of the Camden Lockdown Live Stream!