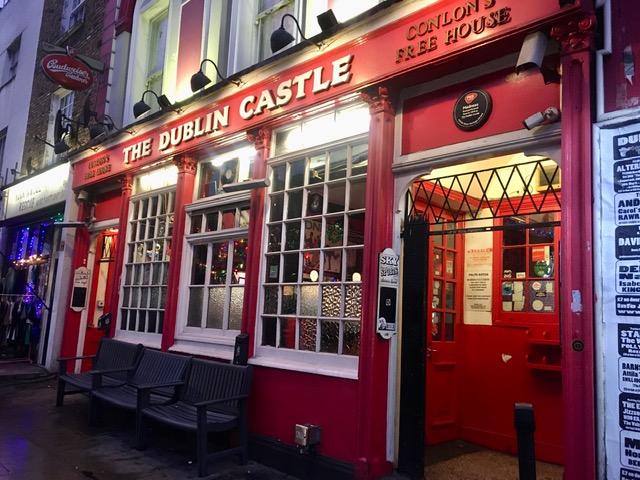 Any Camden regular knows the Dublin Castle; that familiar warm red glow of the pub, the dark, atmospheric back room. Those tables that, while clean, have that particular stickiness of pub tables, where countless drinks have sat over the years.

Initially started as a pub for Irish navvies building London railways, The Dublin Castle quickly became the place to be for music lovers when two-tone ska band, Madness, started performing there in 1979 after falsely presenting themselves as a respectable jazz band.

After those dubious beginnings, this spot quickly became a Camden institution, playing host to the 90s Britpop movement and giving countless new bands their start. This is the spot that helped start the careers of Blur, Coldplay, The Killers, Arctic Monkeys and Supergrass, to name but a few. Muse was signed at the pub after performing a set talent booker, Tony Gleed, described as “electrifying”. The Libertines had some of their earliest gigs here, and later returned for a rather messy residency. Camden’s sweetheart Amy Winehouse was a regular at the pub, performing here often and being known to pop behind the bar to pull pints for punters on occasion.

The back room at The Dublin Castle has played host to many a rowdy, beer-fuelled night. As any music lover will know, this is an incredible spot for catching both established acts and the next big thing to hit the music scene, before they make it big.

It’s easy to see how the pub became one of those iconic, legendary music venues in London – the allure of the intimate back room and the music it has to offer, the great vibe of the pub in front. Comedian Phil Jupitus performed at the venue a couple of years ago, saying, “You can feel the mojo in this room.”

The Dublin Castle isn’t just a pub or just a music venue – it’s a proper good ol’ London boozer, combined with a great selection of gigs.

In this legendary pub tinged with red, I had the pleasure of grabbing a chat with Tony of Bugbear Promotions, who has been booking acts for the venue for over 20 years. Tony is a guy who has a lot of stories to tell – even if he was too drunk when they happened, to remember all of them.

The pub has seen its fair share of wild, outrageous and downright bizarre happenings. The place has been trashed after rowdy gigs. Around 1999, there was a stage invasion during a gig where two people started having sex onstage. And, as Tony explained, “an underground American band called US Maple played here about 20 years ago, and it was sort of instrumental post-rock experimental music and in the taxi on the way to the gig they got talking to their cab driver, and they ended up inviting him up on stage. So this Nigerian cab driver joined them on stage and started doing this experimental music with them.”

Al, a long-time regular at The Dublin Castle and an “unofficial guide” to the pub according to Tony, joins our conversation to share stories about the pub, telling me about how Ben Elton and Andrew Lloyd Webber came in one night. Tony told me what was about to become my favourite story about the place:

“Robert Plant turned up to see a Led Zeppelin tribute band, and the guy on the door didn’t know he was Robert Plant, even though there was a guy on stage looking identical, singing – ‘cos you’d think everyone would know Led Zeppelin, right? But this one guy doing work for us briefly didn’t recognise him and he charged him! And Robert Plant paid! But then he walked in, and he couldn’t handle watching it –  he ran out. I think it was too realistic,” Tony says, laughing.

“’Cos Robert Plant’s such a quiet man,” Al shoots in.

Plenty of rock’n’roll royalty have been through these doors, and many bands and artists got their start here:

“When The Libertines started out here, they’d play for 20 people, 30 people – then they took off. In fact, we turned them down a couple of times. Then we put them on once, maybe the third time we put them on, and I was watching them in soundcheck and I thought…’this band is really something’. And then they really took off, you know, a couple months after that,” Tony says.

The venue has been a major player on the Camden music scene for about 40 years now, and it’s retained its individuality throughout. In fact, very little has changed for the pub, which has been owned by the same family since it was established in the 70s. It’s a little enclave of history – walking into The Dublin Castle feels pretty much the same now as it did 40 years ago, as the interior and vibe remains largely unchanged. It still has that classic pub feel, and electric gig atmosphere in the back room.

As for the music, it’s just as varied and well-selected as ever. Providing incredible live music in an intimate space has and always will be a major focus for the venue. “There’s nothing like it…it’s the best experience, ‘cos you’re right there, I always say you can look up the singer’s nose, which may not be a good thing,” Tony says with a laugh. “But it’s the atmosphere that generates, being on the same level as the band, the personal nature of it.”

As we finish up, Al tells me how much he’s enjoyed his time in The Dublin Castle over the years.

“We’ve had some fantastic times.”