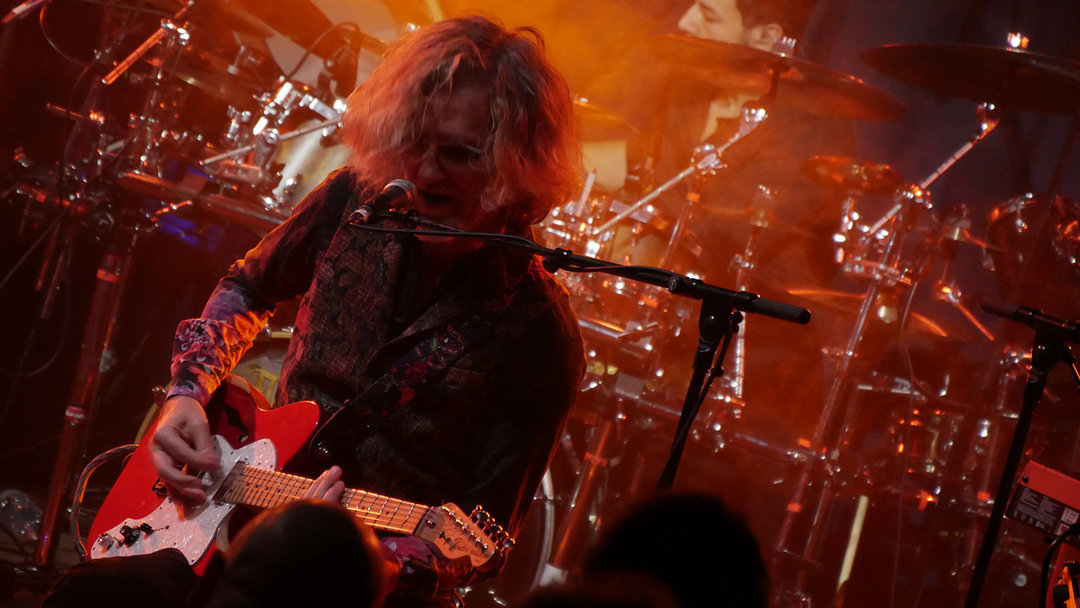 Prog Royalty: Interview with Roine Stolt of The Flower Kings

Prog Royalty: Interview with Roine Stolt of The Flower Kings

I stepped a little outside of my comfort zone and took the Northern Line a few stations out of town to visit the iconic Scala in Kings Cross.  The wonder of this 800 capacity venue which started its life in 1920 as a cinema is that every gig feels like an intimate showcase, but with all the majesty of much larger event.

Who could resist the opportunity to see prog legend, Roine Stolt with his exceptionally talented ensemble of musicians, The Flower Kings, paint a vivid portrait in sound in this gorgeous building?

I was extremely lucky to catch Roine at the venue before the show, in the middle of his hectic schedule to chat about the new Flower Kings album,  his satisfaction with reality and the trials of the road…

Hi Roine.  Thanks so much for taking the time to have a chat with us today.  So this latest tour is in support of your latest album, Waiting for Miracles?

You have such an enormous back catalogue, is it difficult when you’re putting sets together to decide what makes the cut?

I think part of it is knowing what songs most fans want to hear; the core of the Flower Kings’ audience.

Do you ever go back over your back catalogue and get re-inspired by songs?

Of course. We have a reasonably new keyboard player and new drummer. These guys, they’ve only been with the band a year. They come in excited saying “Can we put that one in?! I love that one, can we put that one in?!” but it’s a long list! We do like to change up the setlist as we tour to keep it fresh, particularly when we’re playing the same cities.

After your recent solo album venture, Manifesto Of An Alchemist, your collaboration with Jon Anderson and then The Sea Within album after that, how did the decision come about to make a Flower Kings record this time around?

That was weird really. In my world, I just write songs and make music. The record I made before this, a few of the guys were actually on that as well; Jonas the Bass player, Hasse the singer, and even Zak, who’s playing keyboard on one or two songs.

It was really more of a decision, or a suggestion from the record company that it was maybe smarter to put this out as Roine Stolt’s ‘The Flower Kings’.

But it came very naturally as we’d been out playing. This time last year we were out in Europe with playing Spock’s beard and before that we were in South America. Being out playing live again and having that realisation that we can play live and it sounds good, also sparked the idea that maybe we should write some new music and book some studio time.

So when do you get time to write?

I write when I have free time at home. I’m constantly writing and coming up with ideas. Some of it is used, some is not. Some may be used in The Flower Kings, some may be other projects. I don’t generally think that much about where this song will go. I’m in other bands such as Transatlantic and a few other projects, so I might save them for something. I think I had maybe 70 ideas for this particular Flower Kings album.

What kind of themes and ideas influence your writing?

I don’t know. In terms of the music, it’s very spontaneous. I’m a guitar player but I’m interested in the keyboard when I’m working on ideas. It’s nice and easy to find the chords and the bass notes. Maybe I’m sitting there and humming a melody and then I’ll have my set up with the computers and everything in front of me, so it’s easy to do little bits and pieces and put them together.

You’ve played extensively internationally, how does playing in London compare?

It’s just one of the cities we regularly come back to. Of course, it has a history, much of the music I loved as a teenager was from this town. All the good bands were English. I turn more towards English bands than American bands. The pop music that was interesting for me largely came from England.

The Beatles of course, then Manfred Man, The Who, Procol Harum and later Yes, of course.

There’s an old saying that goes ‘the closer you get to London, the further the audience get from the stage’. Have you ever felt that at all?

Oh Really?! No, not at all. I never felt that. Of course the audience is different anywhere you go in Europe. In the Southern Europe countries like France, Spain, Portugal it seems in some strange way like there’s more women in the audience? Also they’re a bit louder, I have no explanation why. The further North you go, towards Sweden, Norway its more like guys standing watching and examining the band.

That’s really difficult to say because they’re all different. When we were in South America about a year ago, we had some great shows in Mexico. Fantastic audience because they really like to be part of it. They’re yelling and singing along and clapping, trying to be part of the performance. It’s great.

Holland is also good. I don’t know what it is about prog and Holland, but it’s always good. But you know, we’ve had shows in London which have been great.

What would be your dream place to play, that you haven’t yet?

It might be interesting for some to hear you’re quite a down to earth bunch.  Being quite a prog/psychadelic band I think there’s a lot of people who might associate that with use of certain illicit substances.  Is there any truth to that association?

Not for me. To be truly honest, I’ve tried weed twice. It was okay. I’m not against it in any way. I wouldn’t try anything harder. I think when people enjoy listening to The Flower Kings and smoking weed, that’s fine, you know? In America in particular people enjoy that. They like the band and that’s great. I remember talking to a drummer from a well-known band and he was asking me “Did you ever try LSD? I thought I could hear influences in your music?” And I was like, “Noooooo. I’ve never tried that.” I guess the brain produces something itself and that allows me to come up with things that may sound similar to what other bands who do take drugs come up with. Which doesn’t mean I’m against it at all, but personally, I’m happy with my reality the way it is.

I noticed a lot of similar themes and styles in your artwork, maybe a bit of 70s sci-fi influences.  Do you use one artist in particular?

I try to move around a bit. Some guys we used maybe twice. There was one Swiss guy that lives in New Mexico now I think. We used him for two albums and for the album I did with John Anderson, we used Silus for that one. For the latest album, I went searching online for something painted with real oil on canvas. So many people are doing computer-generated stuff which is great, but can feel a little bit cold. I feel if someone puts a brush with colour on canvas, it will look a little bit different. So I contacted this guy I found from Colorado and said, “I like some of your paintings. How would you feel about contributing something to this project? How much do you want me to pay?” etc.

The elephant standing on the house of cards is like a symbol of the position we are all in now, with global warming for example. Everything could go very wrong. It felt right contextually and we all liked the painting in itself.

Is the climate crisis an issue that you’re actively engaged with?

Not actively I would say, but I try to read and to learn and to understand more. As far as the little things that you can contribute as one person goes, I do what I can. I try to be conscious of what I buy, I don’t even own a car anymore.

What do you feel makes a great live show?

The way I like to present a live show is as more of a cinematic experience than a rock show. That’s how I see it. I think the music should paint pictures.

It’s not important for us if the audience is jumping up and down or dancing. It’s fine if they do of course, but we’re not looking to have a riot. That’s not the aim. Feeling the music live is different to listening on your headphones or stereo and we’d like people to take in the whole atmosphere and be filled with the music when they leave the venue. We pour our passion into it and try to include as much of the layers of sounds that are on the records as possible.

There are many actually. I saw U2 in London when I was on tour with Steve Hackett.  I had one day off and it happened to be a U2 gig.  That was a great show. It’s the music, but it’s also the spectacle of it. That was definitely in my top 5.  But also, Jackson Brown, which is like American Country Rock.  I saw Robert Plant live in Sweden a couple of years ago. Fantastic sound, fantastic show. I’ve seen Yes a couple of times and it’s been good every time, particularly in Stockholm back in ’77.   That was a great show.

But then it’s one thing to see a U2 show, or Roger Walters, but sometimes you can go to a venue this size and there’s a bar standing at the bar and it’s great.  Different kind of show but it doesn’t mean the experience of the music is any less.

Anything exciting you have coming up you’d like to give us some hints about?

I’m working on an album with Transatlantic (the other band I’m in) at the moment.  That’s going to take some time though, maybe a year?  I’ll expect we’ll be recording something with The Flower Kings as well, maybe next Spring or Summer.

At the moment we’ve got 6 more shows on this tour in Europe.  Then its back home to rest for a while, let my collarbone heal which I broke recently.  It’s kind of nasty but I survive and I can play!  Then we’re heading to Japan in January.

We’re also doing something called Cruise to the Edge next year, which is like a boat full of prog bands, with Yes as the host.  Steve Hackett is there, Steve Luca from Toto, Simon Phillips the drummer, Marillion I think. Should be great!

So there’s a bit happening next year, it’ll probably develop into more, maybe even an American tour…