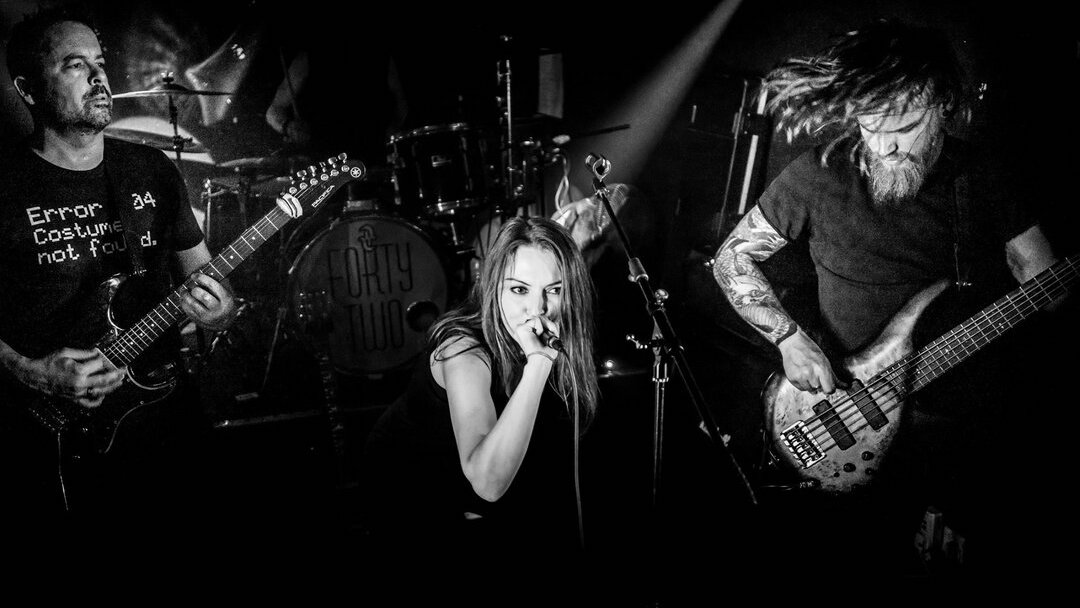 Aren Drift Scratch Beneath the Surface

Aren Drift Scratch Beneath the Surface

Brighton-based Aren Drift’s soundscapes are so hauntingly ominous they’d make Darth Vader quiver and run for cover in the bushes. When their debut EP Beneath the Surface first hits you, the strained, opening guitar of ‘Intro’, threatens malice as it swoops in then halts while we linger, devastated in its wake.

Aren Drift establish their uncompromising, aural landscape from the get-go – it’s a cold, barren and distant land, crying out for occupation and then trampled underfoot by its new inhabitants in the form of raucous guitars from Czech-born Radka Nemcova, the ‘Aren’ R.N. of Aren Driftwith Matt Plumley on lead, the temperate bass of Dave Moore (replaced in 2018 by Theo Corcoran) and the steady drums of Dominic Cahillane.

The four-piece band were well on the way to seeping into the public’s consciousness after the success of their 2018 single, ‘Snow Queen’, until the evil Rona, like a playground bully looking for kicks, stuck out its hoof and tripped everyone up for its own twisted joy. Aren Drift’s 2020 tour was postponed and the world was cast into shadow – a contradiction of luck that reflects the light and shade that matches the musical make-up of the band.

In the meantime, we have their strong EP that landed in our laps just in time to whet the appetite for those promised days of the future when we get to share music with each other once again (remember people?) and breathe in the fresh(ish) Camden air (remember air?!)

Released in 2019, this artifact from the-time-before-the-big-C is a decent introduction to the band’s musical universe, so what better place to start than with the song that put Aren Drift on the map, the aforementioned Muse-like ‘Snow Queen’. Carrying an Andalusian cadence, Radka Nemcova’s distant left-panned vocals are awash in reverb, lying alone in the foggy wilderness like a dame in false-distress. This sets the tone only for a short while until the unexpected arrival of metal guitars and punchy drums, panned firmly to the right. Sneaky, well-poised, extreme panning seems to be a colour in the band’s palette, used sparingly and to great effect.

If there is any recurring message in their songs it’s ‘don’t get complacent’ as Radka’s ‘Snow Queen’ strongly affirms with the hook: ‘I don’t have tears to cry’. The queen doesn’t need rescuing but maybe you do as she asserts ‘I might hurt you baby’ and ‘I will rule over you with just one kiss’.

These are the words of a ruler who is not frightened of her power over others but questions that force of nature when she fatally turns it against herself (‘Feelings are buried in the ground’). The light acoustic guitar that hovers on tiptoe is then anchored by heavier, distorted guitars that riff like a scream and keep the Andalusian-feel in motion. Like the Snow Queen, they demand to be heard. This is the tone and timbre of Aren Drift’s broad musical expression: fire and ice; ferocious and gentle.

In interviews, the band have noted their nu metal influences and you can hear that sound clearly in ‘Light Hole’ where the unsettled vibe continues as Radka sings about feeling ‘like a tightrope walker on thin thread’, alluding to addiction and the struggle to keep steady. Conscious of the temptation to fall (‘I’m slipping down to the dark place that is in my head’), the lead guitar also descends and the internal and external landscape is once again in symbiosis.

‘Light Hole’ is full of unexpected chord changes and melodic shifts (I like a surprise!) and you sense that this is Aren Drift’s forte. The guitars are carefully raucous and politely shredded, at times tonally reminiscent of Pantera’s Vulgar Display of Power and Deftones’ White Pony but with more room to breathe and richer musical dynamics, perhaps more akin to Radiohead’s Ok Computer if you squint a little.

After the unsteady tension of ‘Light Hole’ comes an aural exhale, as Radka sings of ‘the disease we accomplish together’. You can hear the strength of her vocals here; they’re powerful, controlled and flush with feeling. I’m not one for hyperbole but Radka can safely take her place in the league of strong female singers – from Janita Haan (Babe Ruth) to Mariska Veres (Shocking Blue) which makes it impossible to not be immersed in the experience with her.

This absorbing quality exists throughout and it’s not just down to the band but also the roster of talented people behind the scenes. Beneath the Surface was produced by Radka herself, mixed by Frankie Pleece and Eds John, with mastering engineer Pete Maher (Jack White/U2) pulling the levers. The best of this collaboration is surely reflected in ‘Sun Goes Down’ where the production really comes into its own and compliments the dynamics of the music, making it my favourite of all of the songs on the EP.  The song grants you an immediate invitation: ‘tell me, tell me… what you’re feeling’ while the guitar slowly hangs and so you arrogantly think, ‘Okay I know where this is going’. Then we stop. In comes the Zeppelin-like riff (and it’s a pretty great riff) but it doesn’t end there. The most impressive aspects of the song are the structural changes, suggestive of what an M.C. Escher painting might sound like if given a voice.

Structure in music is everything – certainly to me and if it isn’t to you, sort yourself out. Rock music today is structurally safe, taking little to no risks and I hope Aren Drift take even more risks that can push the genre further.

‘Sun Goes Down’ continues with Radka’s vocals rising up coolly through the fiery guitar as it meets with its own counterpart – an echo of itself. This vocal accomplishment in managing to sound both like yearning vulnerability and a hissing, almost seething punk-like expression, much like Siouxsie Sioux, as Radka promises that ‘butterflies will fall to ground’ and etches into our minds the distorted beauty of ‘clay paint in a lush field’. How’s that for lyrical imagery?! As she harmonises with her own vocals it then falls to the aching tremolo of the electric guitar to see us out. A beautiful conclusion to a pretty solid EP.

Exciting things are in the pipeline for Aren Drift as they head to the studio later this year to work on their debut album as well as getting ready for upcoming gigs from Brighton to Manchester, with a stopover in London along the way. A band announcement to watch out for on their Instagram in July suggests another line-up change on the way.

Rumour also has it that they will be playing at The Blackheart for one of our CMDN gigs (okay, they told us) so have a listen to Beneath the Surface and memorise the lyrics so you can shout all the words at them feverishly in a dark room in Camden later this year! They’ll love that.