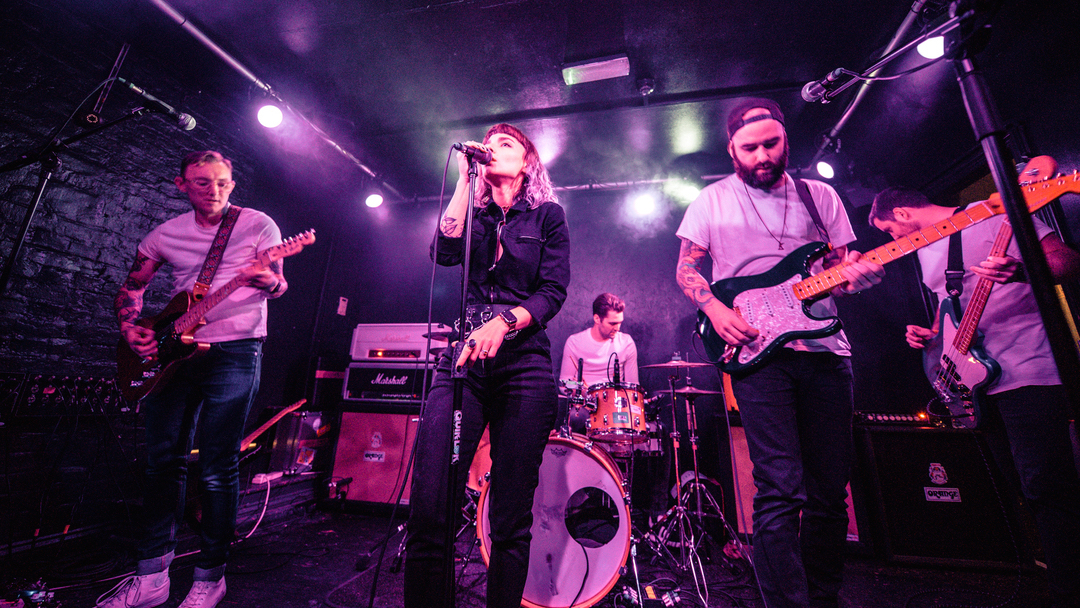 Simona grabbed a stool and had a chat with new rock n roll band, Lyoness. And they do not care. Later that night they rocked the hell out of the Black Heart. Here’s what happened:

So when did you start Lyoness?

Dan: It started off as me, Gillian and Steph, just getting together and writing some songs, and then we sent ideas back and forth, and got something together like that. Allie was a drummer that Steph knew, through work, got him involved, and then… I don’t know where Simon came from, if I’m honest. *laughs*

Gillian: He just showed up to practice one day, he just appeared out of the blue, and we just decided to keep him.

Dan: Yeah, we didn’t let him go back home.

How did you all meet?

Steph: So, Gillian’s my wife, and we did a band before this called, ‘The Ghost Riders in the Sky’. We met Dan when he was playing in his band, the Dirty Dead, in Basingstoke?

Steph: And I’ve known Allie for a long time because we worked together in some different recording studios, and I met Simon, through a college job that I’ve got. I work with bringing masterclasses and sponsors into the studios and I didn’t really give him an option to join the band, I just told him he’d be playing bass for us. *everyone laughs*

How long did it take to get prepared for this gig?

Steph: We’ve been planning this one for a while, we knew that we were gunna be releasing the second single in early October, we set a deadline for it and knew when we were gunna be putting it out. And then, we had one rehearsal last week, that went quite well, we thought ‘yeah, we’re gig ready.’

Gillian: One where people turn up *laughs* – that’s our favourite venue in general. When we’ve got a good crowd – people that wanna come and see live music – ’cause it’s harder to get people out, regardless of how expensive the tickets are, what day it is, what season it is – it’s just nice to have people who wanna come out and have a good time.

That’s is why we started Camden-Live, to try to get people to go to gigs, even if they don’t know the band, because, when my grandparents moved to London, people used to be going out all the time. Now they just stay in at home, watching live videos. And the problem is that most bands are putting videos up and people are watching them comfortably in their homes instead of getting up to go and watch a gig.

So I’m like, why don’t we just discover new bands, because everyone is going to go and see Marilyn Manson, everybody is going to Rob Zombie but, who is going to discover other new upcoming bands?

Gillian: People will pay £500 to see Beyoncé, and I’m not saying it’s not a great show, but-

Dan: And I’m just as good looking as Beyoncé, so…

So for us, playing venues like this – the Black Heart – have been great to us for this show, and it’s a wicked venue, so-

It has a great sound-

Steve: Exactly, and everyone is going to be here is going to have a wicked time, and that’s what live music is all about.

Give me 3 words to describe your band.

And what inspires you to write music?

Gillian: Oh Jesus, this is the same conversation we always have.

Dan: Mine’s “the Colours of the Wind.”

Dan: The Waft of a Butterfly!

Steph: The Waft of a butterfly?! *laughter*

Dan: For me, it doesn’t matter, if I’m having a bad day I just kind of, pick up a guitar and it just kind of happens.

Simon: At the moment I’d say, it’s each other, I think we all inspire each other to play.

“Look, you can’t really be a successful band unless you’ve cut your teeth playing in Camden.”

And what advice would you give to the new generation that is trying to write music?

If you don’t enjoy your bandmates, which, to be said, we’ll all get on each other’s nerves at some point, ’cause that’s like any friendship or family, but if you genuinely like the people you work with, and enjoy the music you’re making and you push each other while supporting each other? That’s the crux of it.

Dan: I think you’re right. I think the most important thing for any new band starting out is to be true to yourself and just write what you wanna write, don’t worry about anyone else.

And how do you feel about tribute bands?

Dan: Yeah… I think it’s bullshit to be honest. I think the problem with it, is that, tribute bands for bands that already exist is fucking ridiculous. Go watch Foo Fighters! If you wanna see the Foo Fighters, go and watch the Foo Fighters, you know?

Whereas, there are loads of up and coming bands that aren’t going to be noticed, aren’t gunna be seen and aren’t gunna make it, because people are spending their money going to see a version of a band that already exists.

Steph: Yeah, and to be clear, tribute bands, not cover bands.

So what is it that you like about Camden? Do you prefer the earlier punk version or its vibe rn?

Dan: I don’t know, tbh, walking into Sainsbury’s earlier to buy a packet of crisps, it’s still pretty alternative back here. *laughter* There’s some characters to say the least.

But, Camden’s just so important for music, especially in this country. Look, you can’t really be a successful band unless you’ve cut your teeth playing in Camden, ’cause of the cultural heritage of music from here…

Camden Rocks is a huge thing – we did it in our last band, and it was just an amazing thing – to see 140 bands playing all on the same day, in the same town, in venues that just popped up out of nowhere. You don’t get that in other parts of London.

It’s just so great what Chris (the organiser) is doing, it really did create something hopeful for Camden Town. But I think if Chris wasn’t here, I think maybe the Rocks thing would be dead!

Dan: Exactly. A guy from Yorkshire pretending to be Dave Grohl?!

Dan: I think a shout out to the Black Heart, for being really good to us, we wanted to put on our own show, they were just so open and easy to work with.

Steph: And, also, a shoutout to Bearheads, Assimilate and Poltergeist, who are all up-and-coming bands that are playing with us tonight. They’re all good friends of ours.

Gillian: And plus we really like their music – it’s not just friends – it’s that we genuinely like what they do.

Steph: Yeah, and when we approached them for the show, they were all so onboard straight away so like, it’s good to support up-and-coming music.