Last week I spent my first ever night in Camden. I walked off the tube to the greeting smell of weed, the sound of a man with a passion for Jesus, post-apocolyptic hipster vibes brightly painted buildings, crazy good tattoo wall art, and music fans wearing sunglasses and cool clothes. I felt right at home. 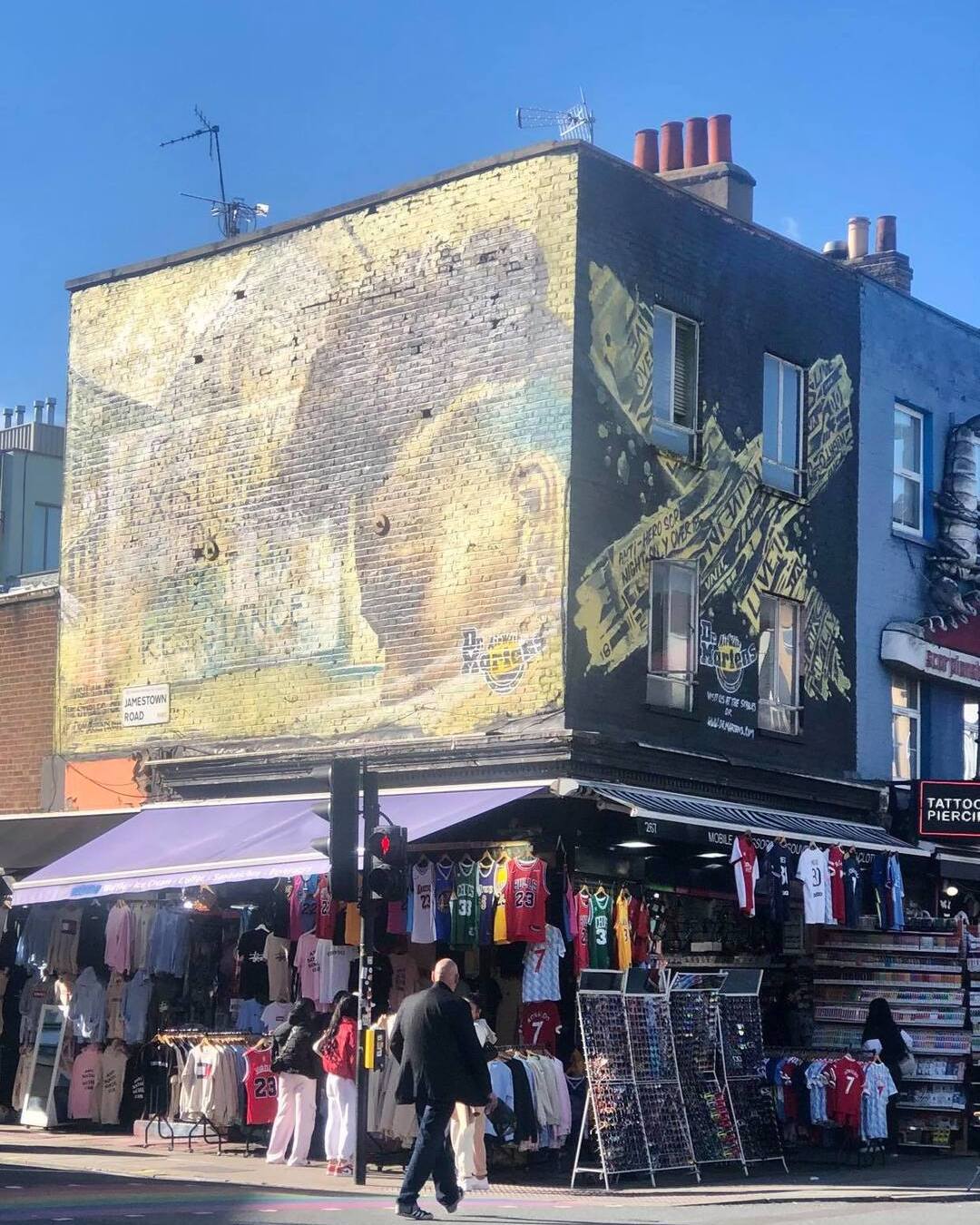 I met with my friend, Jon Coley, which was lovely to see him, because it’s been a hot minute since the big CV hit. We went to the Black Heart to meet the band and they were setting up for their recently allocated headliner slot.

First impressions of the Black Heart – a nice venue, everywhere is black (as you might expect) a cool rock vibe, cleverly designed 80s style t-shirts and merch, black floors, black ceilings, black bricks and that music venue smell. As the owner of the Black Heart herself said, it smells of ‘beer, piss and floorboards.’ Exactly how every original music venue should. 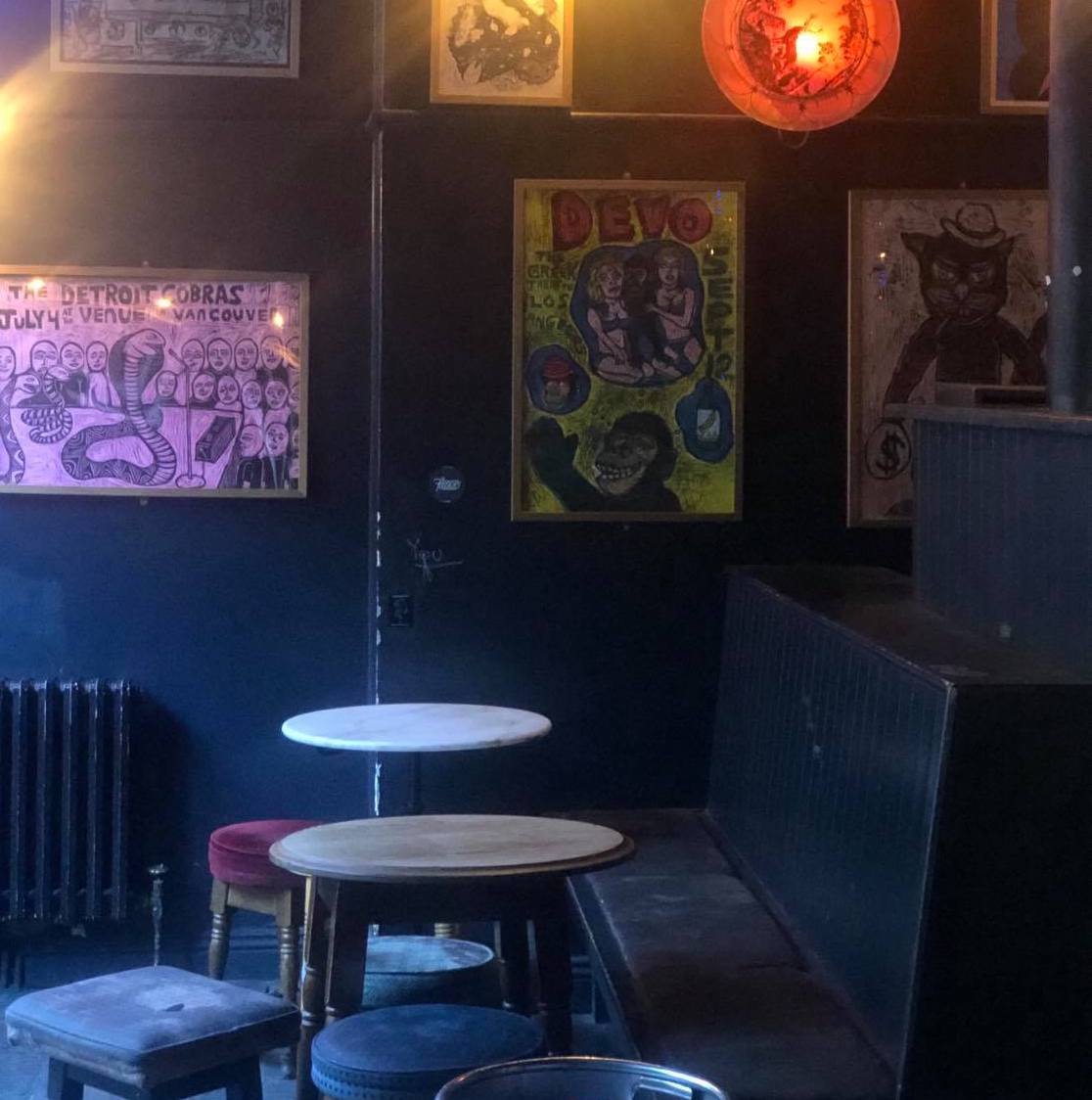 Basically, dingy and retro and a bit cool. Album posters and mood lighting downstairs, bare black room that does the job for the music upstairs.

I met the boys, Rory and Aiden Purdey, both John Martyn’s nephews, (this will likely only mean something if you’re in the folk world, but he’s a pretty big deal out there) who were funny and we gave Jon a good ribbing! 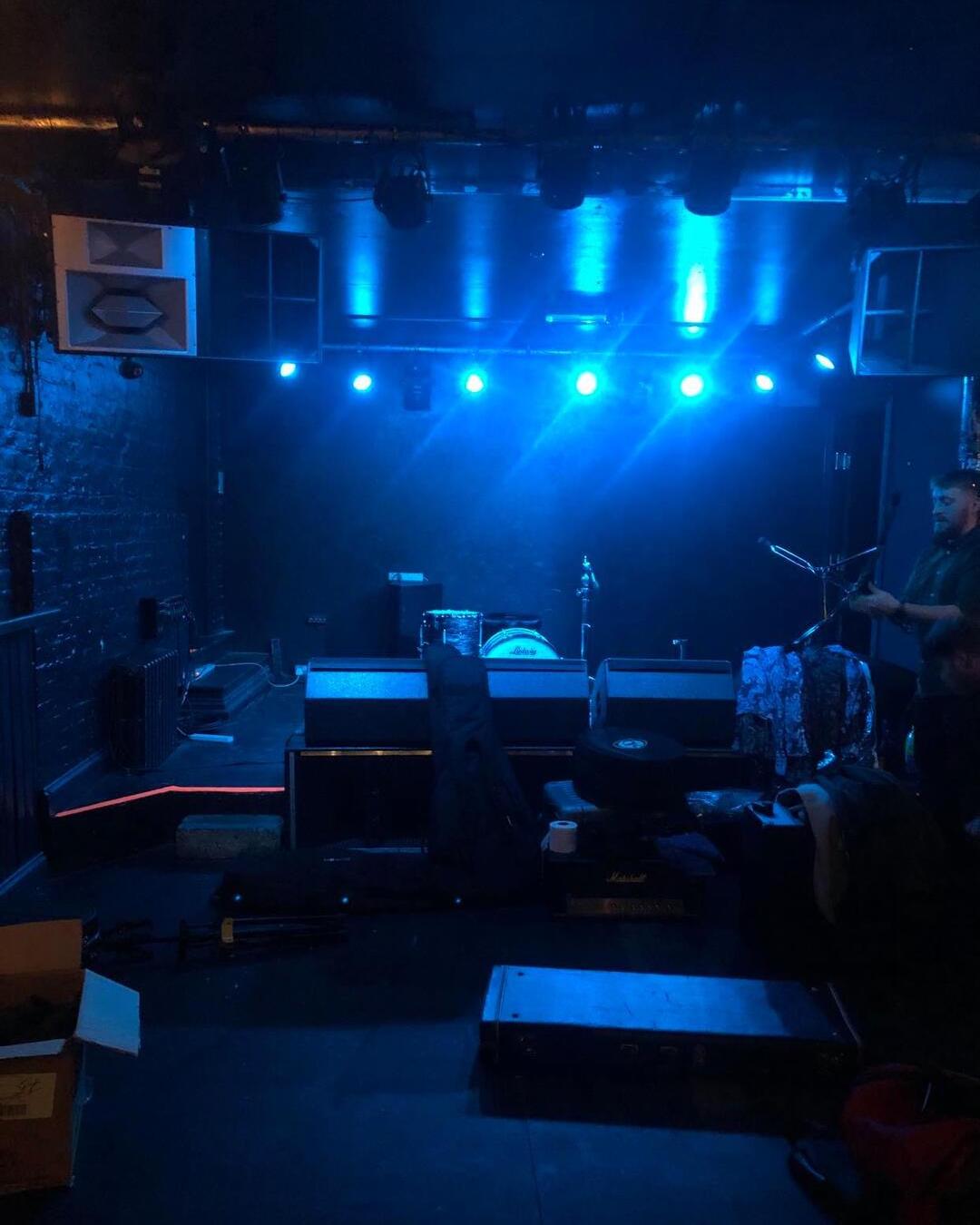 Outside the gig I met Loz Campbell, another of the acts I had booked. She was bright-eyed and spunky, lovely to talk to, with her Lancashire accent and excitement for the gig. The band mates were equally lovely. What more is there to say? We discussed how old we all looked (all very complimentary) and I was told that the new bassist had only rehearsed with them for 6 hours, which is a pretty decent amount to pick up a set.

First up was Penelope Antena, a French girl I had initially seen play in Paris and been absolutely blown away by. (She describes her recent change to alt. electro music as ‘the music that expresses her and reflects essentially who she is.’ And it really shows, because she excels in this Bjork style explosion of harmonies, electronics and beautiful piano background support for the sound.

Her backing singer, seemingly from London (we didn’t meet!) was dashingly handsome and stunned me (when I realised about halfway through the set that it wasn’t Penelope singing to her own pre-recorded tracks) with his falsetto harmonies. Their voices lay perfectly upon one another.

Penelope sounds like childhood playtime to a mix tape in her opening song. There is an innocence to her tracks, while her lyrics are often mature and breathtaking. The lighting reflected her reflective mood as whilrwinds of white milky way lights spun around her.

Described to me by a fan as Norah Jones style in voice, I would say she’s closer to Laura Marling, when making any comparisons at all, which isn’t really needed. She definitely sounds most like Penelope Antena.

‘I’m not as relaxed as I wish I was…’ she says halfway through the set, it doesn’t show. She comes across as a true seasoned professional. When you got it, you got it. Waves of layers of sound cascade, one over the other, and I was left spellbound by the end of the set.

I’d say my main description of her music is ‘heavenly’ … if you’re looking for an alt. religious experience, look no further than Penelope Antena. If you weren’t there, I promise you, you missed out.

Next up was one of my personal favourites (like every act playing) Loz Campbell. Loz is ‘without a doubt going places’ according to Jon… #watchthisspace

Loz transforms from the girl I met earlier to the rock goddess I’d become accustomed to seeing in her videos. Red and blue lights shade her face. She’s ready.

She opened with the Campbell classic, ‘Back Biting the Bullet’, which has a super catchy hook and I’m already an advocate of the track.

Lyndon, on bass, despite only having 6 hours to learn their whole set and was already playing his second gig with them… Well, that’s just showing off! Especially when the bass playing was exemplary.

Loz is a showman. She has the vibrato of a rocker and she easily gets the crowd going. Girl rockers bop at the front and laugh at me with my serious expression and notepad as if I’m too uncool to be there.

‘Bad Girl’ had the moshers grinding with the best of them, with a hook that would give Billie Eilish a run for her money, or at least, a percentage of it (I mean, she IS super rich) … Really catchy and the one to dance to for the night. Loz confesses people think she’s a bad gal on stage, but she ‘just knows how to dress up, I guess’… her solo in this was fire.

By the end of the set, Loz had transformed and it seemed like she was on the war path; intense and almost angry, she bears no resemblance to the ‘nice’ girl I met earlier, and I can’t believe I’ve met her (very young looking) mum! It’s like she’s concocting some sort of black magic and she likes it.

The final act of the night. I can’t say much about these guys other than I felt so proud to see my friend up there with these magnificent musicians. Jon Coley was playing with Grace and Danger, who I would definitely recommend checking out. Before going onstage Jon said, ‘You’re going to be blown away by this band,’ and he wasn’t wrong!

Seeing my friend killing it with these amazing musicians, it was moving. I find it hard to describe Jon objectively because I’ve known him for over ten years and so I’ve always known his music. I’ve always known he was talented. On this particular occasion, Jon, plus a next level band = a powerhouse of sound. They have that certain je ne sais quoi, which basically means, they’ve done their 10,000 hours.

I think Jon felt like he had to be a little more rock than folk following Loz, so he blasted it with the first song and settled down by about the third, which I was grateful for. I’m more a fan of Jon’s bluesy soulful voice and the quieter moments of the set. The band responded to his every move and expression. They blew me away, with a guitar solo so impressive and playing so tight I could only think of one word to describe it: orgasmic.

The night was crazy, fun, stupid, superficial, serious and cool all in one. A whirlwind of my favourite musicians mixed in with falafel wraps, new friends and orange juice (rock n roll!) …  I arrived with one friend and came away with ten.

I had the honour of meeting Tiffany Twisted at the end of the night and that was hyper exciting; more great, down-to-earth Camden musicians with talent slopping over the side of the bowl.

All in all, worth the pain in my feet as I walked home in my heels and met a proud gay man. A night in Camden, is a night like no other.